This post has been published by me as a part of Blog-a-Ton 58; the fifty-eighth edition of the online marathon of Bloggers; where we decide and we write. In association with ​Saravana Kumar Murugan, the editor of Shades Of Life book series.


This year I celebrated Deepavalee a bit early. Hmm, not a bit early but almost two weeks earlier. I was surrounded by crackers, small earthen lamps and candles, lanterns in the sky. There were big "Sale" in the Supermarkets around. Shops were full of gift packages and were displaying those in windows and sometimes on roads. Those roads were crowded, more than they normally are. People were shopping enthusiastically and there was joy and happiness in the air. 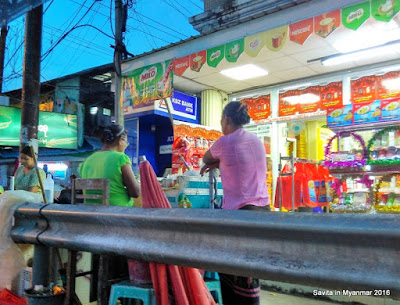 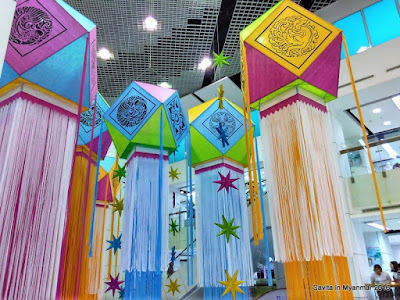 Lanterns at Junction Square Supermarket
Whichever is the country and whatever is the cultural occasion, Market is overtaking it, controlling it. I could not help myself to think about whether the innocence of the festivals will remain the same in future or not. So it be.
Okay. So, I was saying that the entire atmosphere around me reminded me of Deepavalee celebrations, but it was not Deepavalee. It was a festival outwardly similar to Deepavalee. It was a local festival named Thadingyut - to be pronounced as TaDinju.
A note before we move ahead. I have checked the pronunciation of Burmese (Myanmar) words with English speaking Myanmar people. It is no wonder that if we try to pronounce the word according to the English spelling, chances are  8 times out of 10, we would fail to say the word properly.
I am talking about a country called Myanmar and about a language Myanmar (or Burma). For the last few months I have been in Yangon and exploring the language and the culture - or should I say culture and language?

In Myanmar, some of the traditional festivals are associated with specific towns or Pagodas. So I was not sure where I could go to observe and enjoy Thadingyut. Later I realized that Thadingyut festival is celebrated nationwide and hence I could enjoy it in Yangon as well.

Majority of Myanmar population follows 'Therwada Buddhism'. The traditional festival are celebrated according to the lunar calendar. So they don't occur on exactly same "dates" (of the Gregorian calendar). The seventh Lunar month is called Thadingyut. The full moon day of this month is the middle day of the three days light festival - Thadingyut festival. This year the full moon day of Thadingyut was on 16 October, hence the Light Festival was celebrated on 15,16 and 17 October.

This festival has an interesting mythological aspect.

It is a traditional belief that on the full moon day of the  fourth month called "Waso" (which happened to be in July), Siddhardha Gautama , the Buddha went to Celestial Abode called "Tavatimsa". There he stayed for three months and guided the Gods (Devas) in spiritual enlightenment. There are six such Celestial Abodes according to Buddhist mythology. Buddha particularly chose this one, because his mother of previous birth "Maya" was in this abode. Buddha wanted to share his knowledge with her and hence he went to Tavatimsa.

On Thadingyut full moon day, Buddha returned to earth. His path to earth was lighted by various Gods. Thadingyut is a Myanmar celebration of  Gautam Buddha's Return to earth.

Elders in the family are respected by all the members with offer of special gifts. Some people observe half day or full day fast on full moon day. Clothes, umbrella, food is offered to Monks. People light their houses and visit Pagodas to light the Pagodas.

I visited Kyaik Waing Pagoda with two of my friends and enjoyed interacting with local people. A mythological story of a "hide and seek" between a Nat (powerful spirit) and Buddha is associated with this Pagoda. This Pagoda was initially built in 1872 and later was expanded.

Here are some moments of Thadingyut in Kyaik Waing Pagoda. 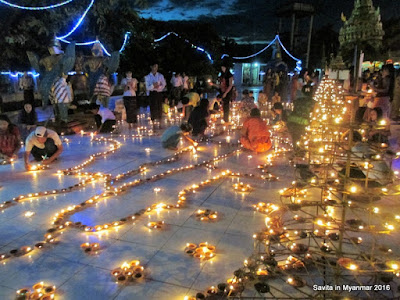 Enthusiastic Citizens at the Pagoda 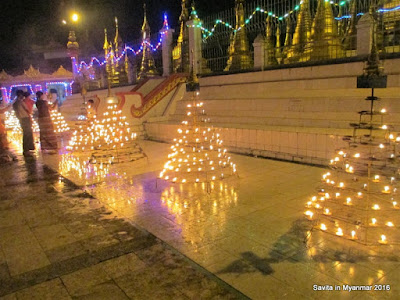 Special Stands to keep the Candles and small  Earthen pots

While celebrating a Festival of Lights, which is very similar to Deepavalee celebrations in India, I came across one more realization. Whichever is the country , whichever is the religion (or even if people do not believe in any religion), people like to celebrate together. People always dream for destruction of darkness (pain, suffering, poverty etc.) and the Return of Light (happiness, joy, smiles) in their life.

"From Darkness to Light" is the common prayer we all have.
We all want to Return to Light.

The fellow Blog-a-Tonics who took part in this Blog-a-Ton and links to their respective posts can be checked here. To be part of the next edition, visit and start following Blog-a-Ton. Show your support for the hastags #BlogATon58 & #Aativas50. Participation Count: 50.